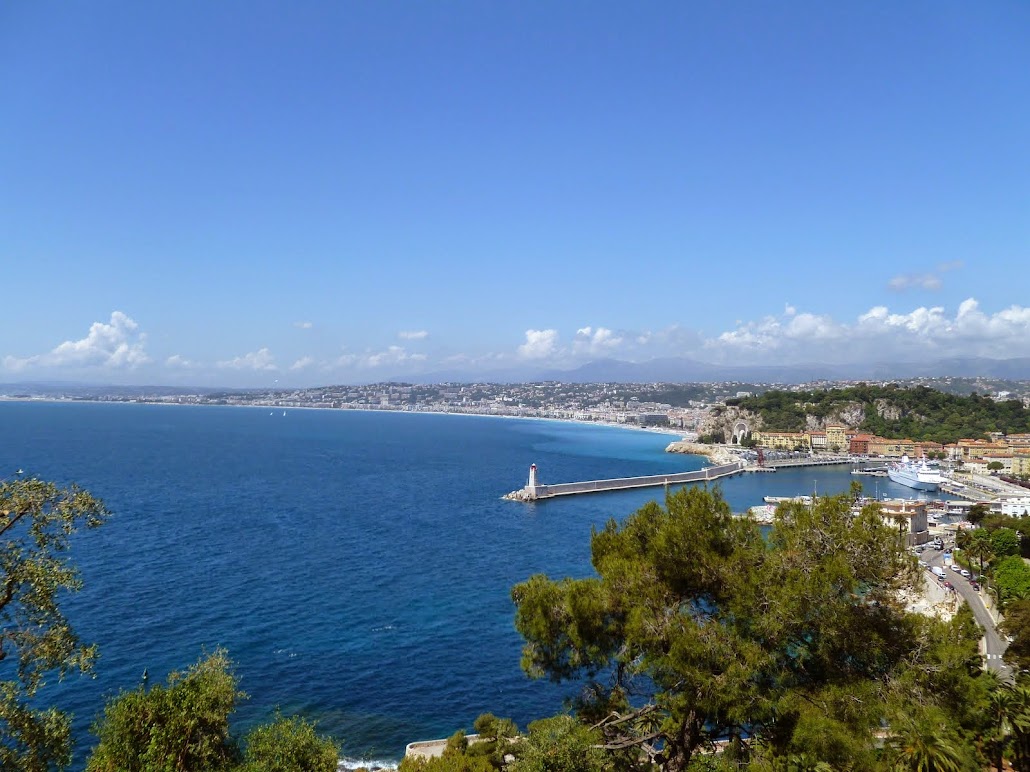 it all starts with a beach 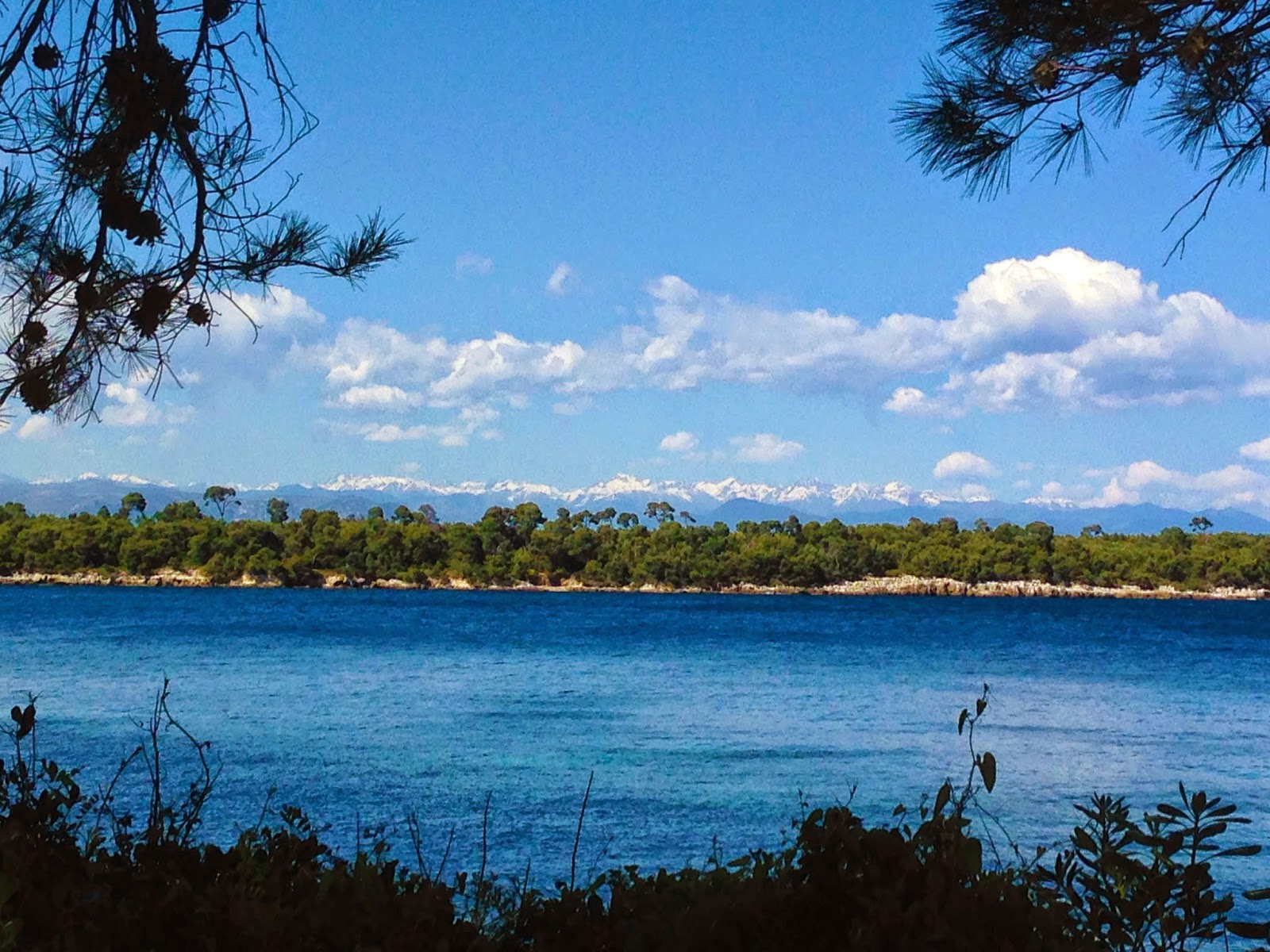 The Island
is stunning! Vineyards sprawl through the interior, and seven chapels, numerous houses and outbuildings, fortresses, forests, the abbey, turquoise water, and magnificent views hug the coastline. It's a natural preserve, with pheasants and sea birds, eucalyptus and pine, palms, vines...and no chemical sprays. Wild blackberries and the ever-present tower of the abbey. The island glistens in the Mediterranean, off the coast of Cannes and the Côte d'Azur. Just a twenty-minute ferry from the mainland, the isle is only about four kilometers around (40 hectares), with a couple of crossroads - an easy walk for day trippers, who come to get their tranquil on, stop at the church for midday mass, pick up a book or a bottle (or other products made by the monks) at the gift shop, enjoy a lovely lunch at La Tonnelle, the restaurant on the north side. Perhaps a swim, before returning to busy lives. The last ferry departs at six pm, leaving behind only twenty monks, forty or so retreatants, nine student volunteers. And silence.
I am staying for a week (E300, including meals) to photograph the natural beauty of the island and interview residents. And to get my tranquil on.

Only four kilometers in circumference, this Lérins isle lies south of St. Marguerite, larger and famous for one of its prisoners, the man with the iron mask. The fort now houses a museum of modern art, and both islands (and two smaller ones, uninhabited) are under the city of Cannes. 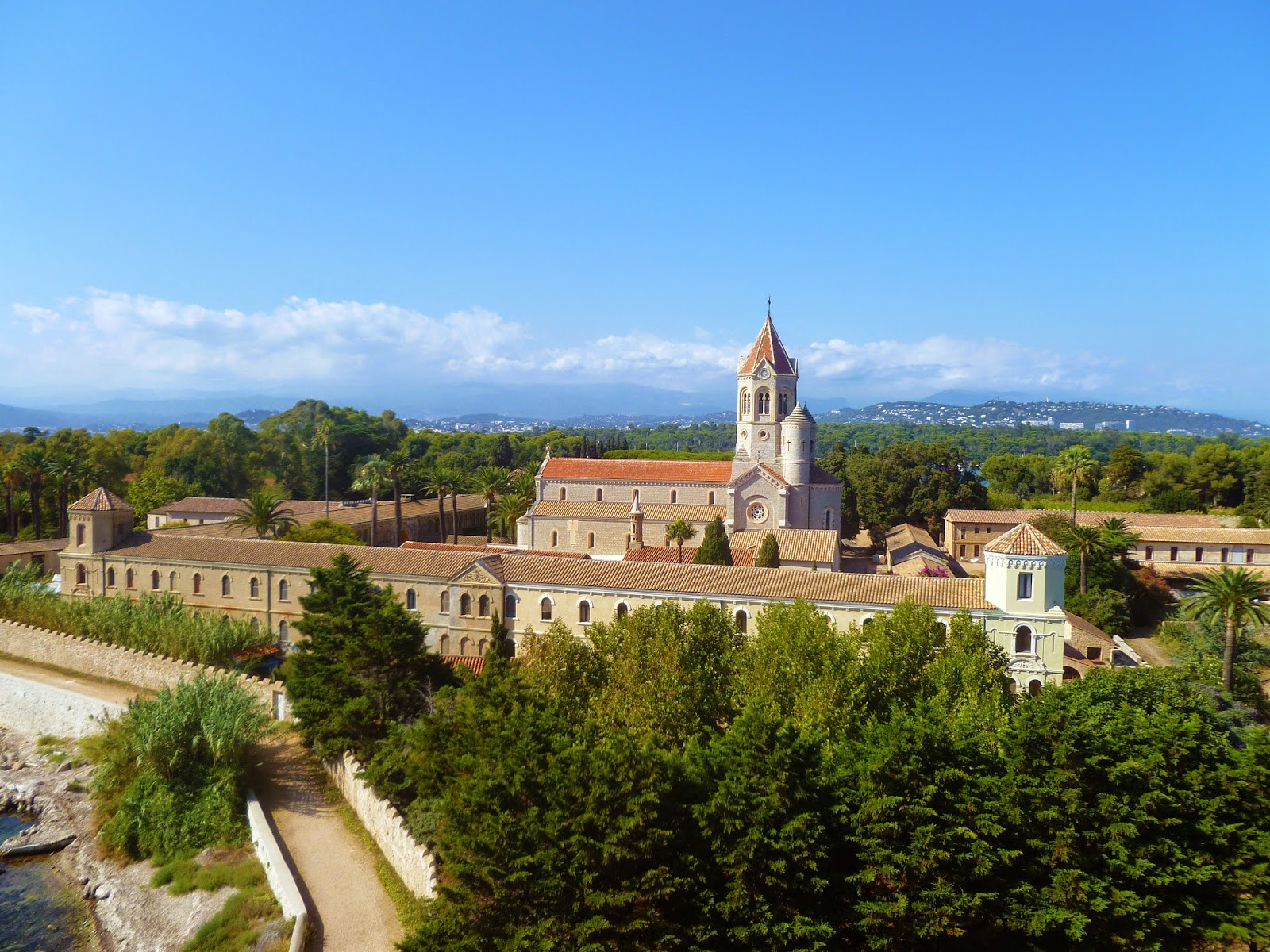 The Monastery
is a spiritual resource. Room 12 is spare, tidy, monasterial, with a small bed, desk and chair, sink, and shelves. A French Bible. An arched window looks over the courtyard, through the lemon trees to the vast sky, dotted now with puffs and billows. There are gardens, a private prayer room, library. Toilets and showers are at the end of the hallway, open by arches, looking down to a garden and a private pathway to the church, open day and night for retreatants (nine to six for visitors).

It is quiet except for the cicadas and the sea, which carry on a conversation, competing for my attention. The cicadas remind me of my constant tinnitus, the sea of my various homes on various islands. I shower then sleep, waking to chimes and the horn of the last ferry to the mainland.

Vespers at 6:30.
One by one the monks (respecting the rule of St. Benedict based on prayer and work), dressed in white robes with belted and hooded black tunics, enter, taking their seats in the chancel in the front. One greets us in the nave, eyes sparkling. A tenor begins the chant, his sound traveling up the piers to the vault's apex, filling the space...and me. The other monks and retreatants respond in antiphony. After ten minutes of this, six monks circle in the center and pray in four-part harmony. We respond. It is mesmerizing. I tone. Frère Etienne reads (his voice echoing) for about two or three minutes.
Between the echo and the French, I have no idea what he is saying/praying, but his voice is melodious and kind.

I love that they chant their prayers. The toning heals me, brings me back to some original innocence. More chants and alternating responses, with different monks leading from different parts of the church, the sound dancing through the space, mixing with centuries of song embedded in the stone, then embracing the congregation. Standing and sitting, bowing, listening. A prayer is read as twenty monks file out. Silence fills the space behind them. 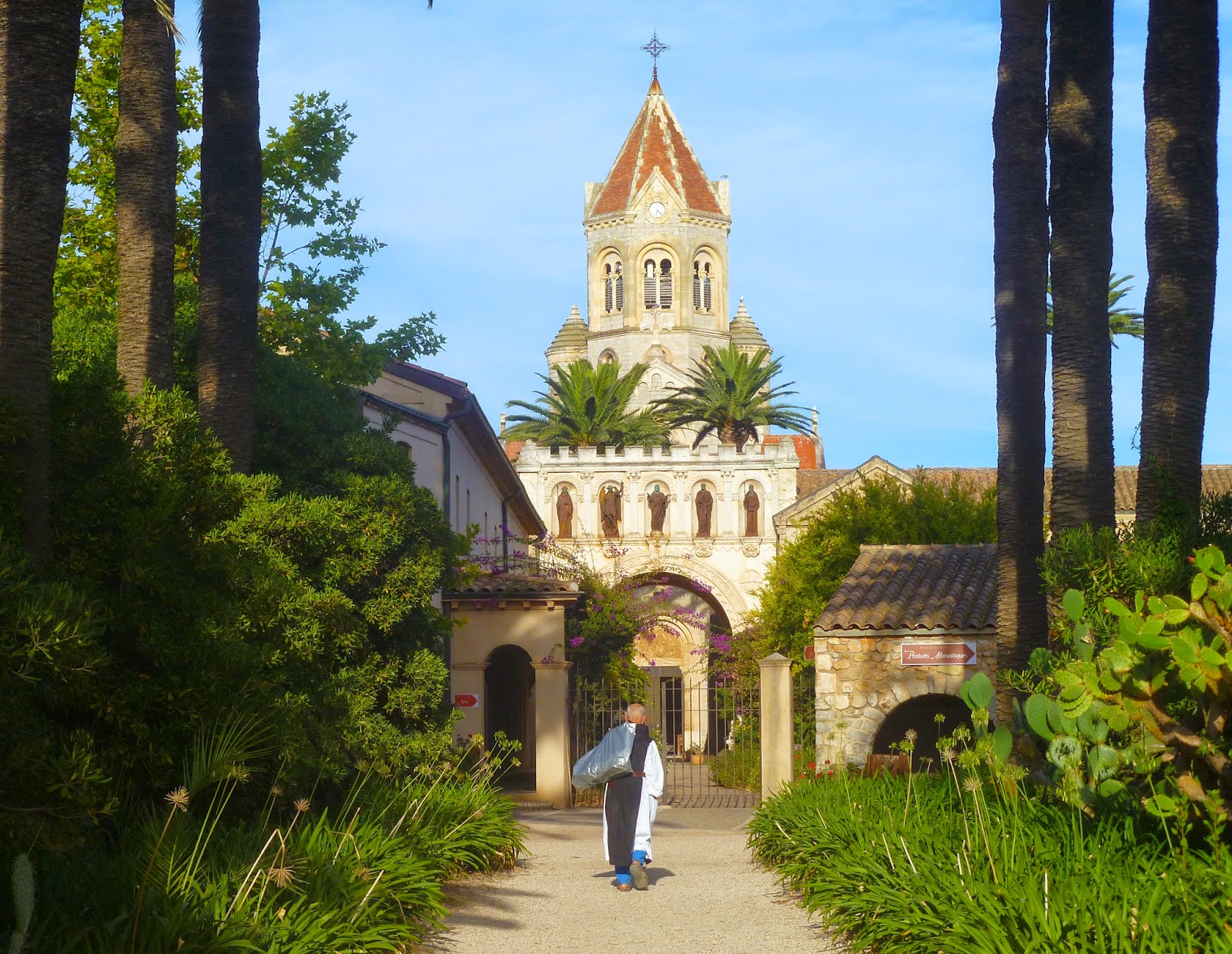 A Paradise of prayer and brotherhood
Home for 16 centuries of war and peace to the monks of Lérins Abbey, the island is first occupied by Caprais Honorat and some companions between 400 and 410, who form a community of monks, which grows rapidly in this (then) Roman province. A troubadour sings, and we know the stories of St. Honorat, who becomes the Bishop of Arles later in his life. In the 5th century priests can marry, and the wives are kept on St. Marguerite. Benedictine vows are taken in the 7th century. Over the years Italians and Spanish occupy the island. In 734 all the monks are massacred. The island is later sacked by Genovese pirates. Monks are captured and enslaved in Spain. French royalty occupies for awhile in the 1700s, and it is closed during the revolution. Near the end of the 18th century it is nationalized (and protected) under the French.

Today twenty monks live and work here, ranging in age from 28 to 82, most between 50 and 60. They seem fit and happy and would welcome other brothers. A high of forty occupied the island in the 1980s, following a revival by the young sisters who came during the war, when the orphanage was closed, and lived here from WWII until 1991.
Praying from 4:30 am, the monks work in the fields, with the guests, and oversee all the businesses of the island:
Winemaking (also a distillery for Lerina and five other liquers)
La Tonnelle Restaurant and retail shops (physical and online)

Boat company - with a barge and two ferries, bringing 90,000 day trippers and all the goods to the island
Guesthouse (runs at virtually 100% occupancy - 3,000 seekers - with 'high season' Easter to November)
Teen and volunteer programs, conventions, exhibits, special events

...all with no days off. And one week to ten days of vacation a year, usually taken mid November to mid December, when the island is closed to guests and visitors. 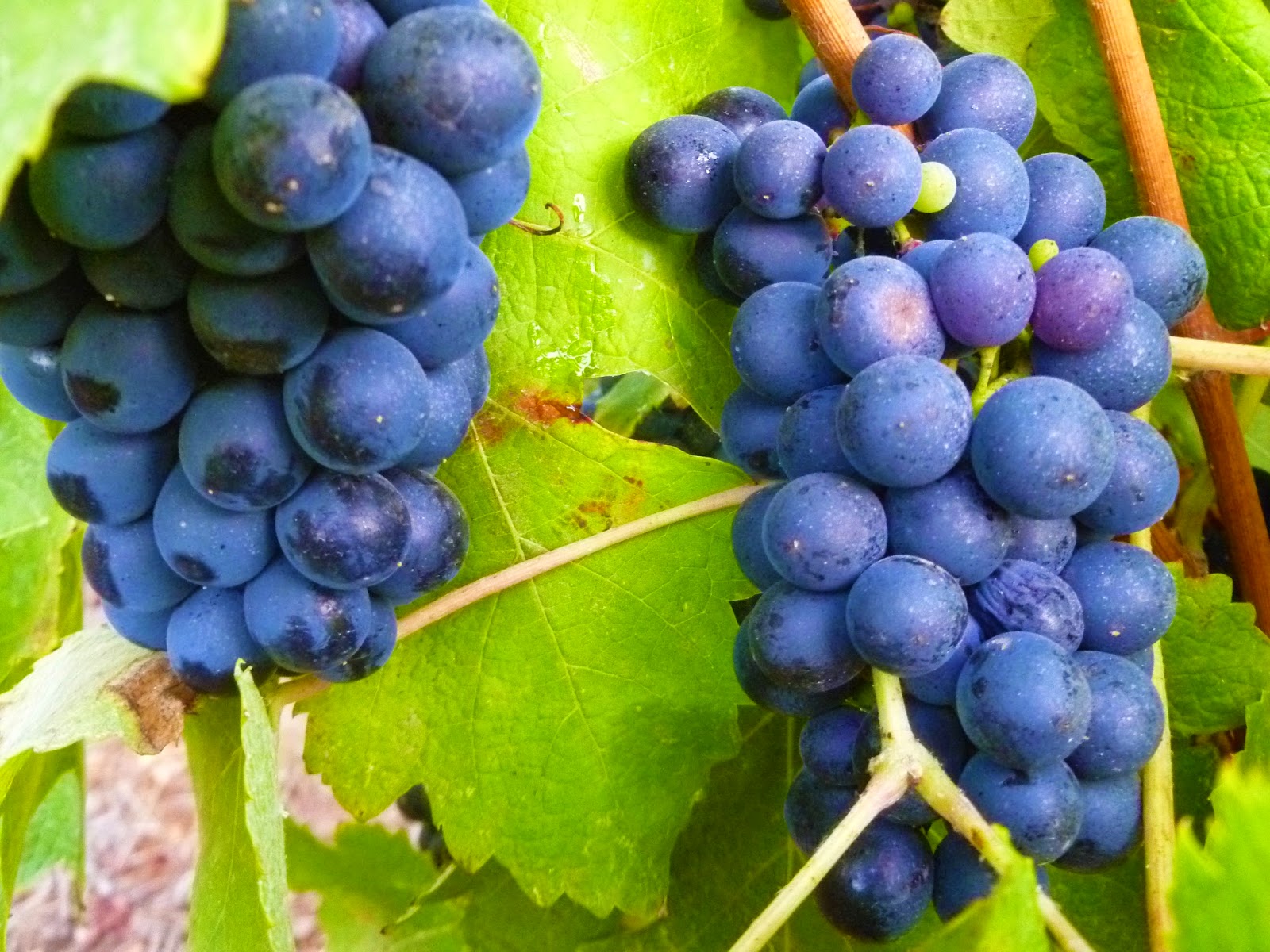 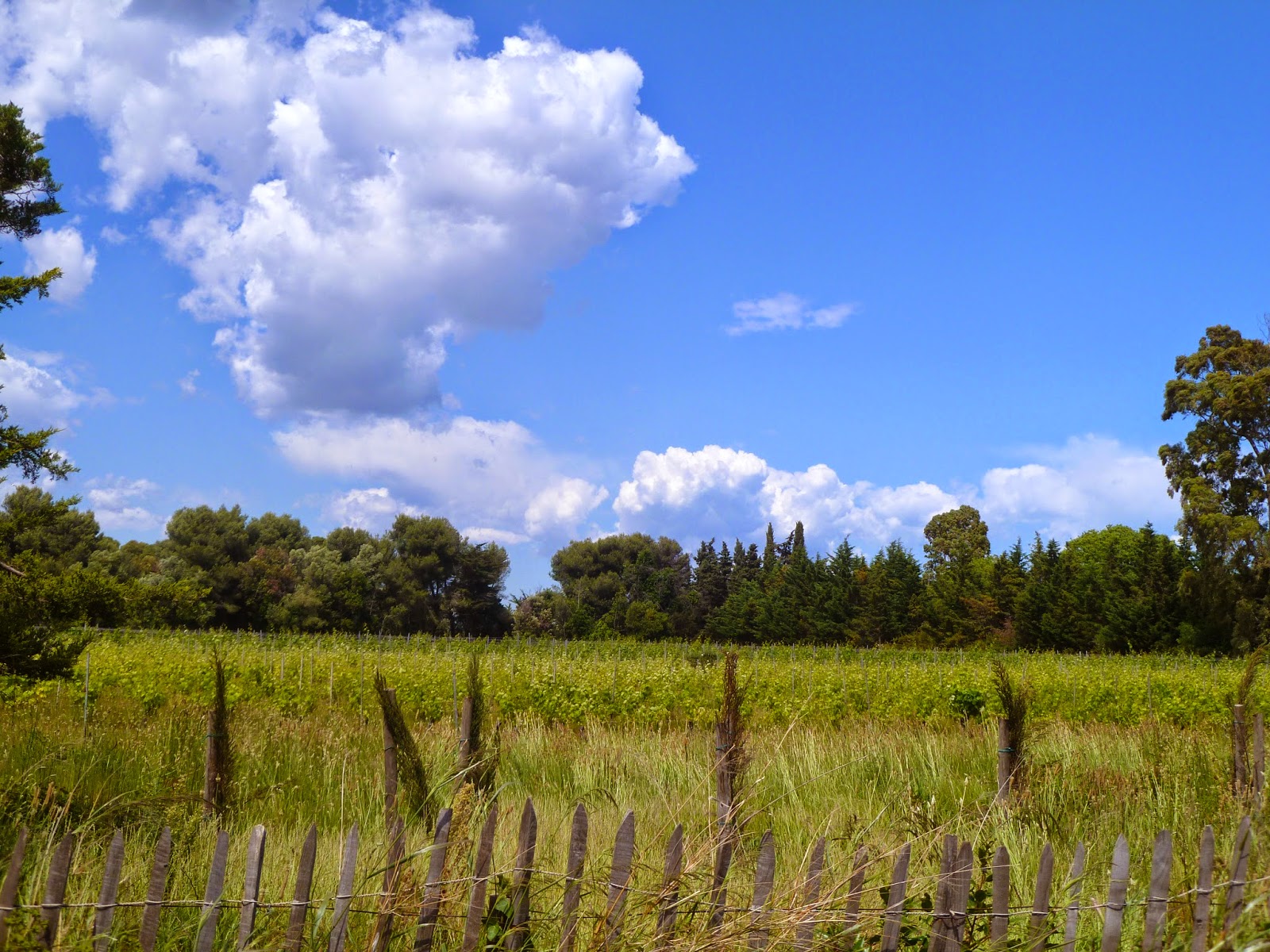 Vendange
It's harvest time, and guests and other volunteers work side by side with the monks, picking grapes. Known for their wine-making, the monks have won numerous awards, and I can testify that their wines are incredible. Pinot Noir, Syrah, Mourvedre, Chardonnay, Clairette, and Viogner grapes excel on coveted terroir. Olives too, from which they press exceptional extra virgin olive oil.

I meet with the winemaker, Frère Marie, for a tour of the winery. He reminds me that for centuries (since the middle ages) wines are grown on only one and a half hectares and for local (monk) consumption only. In 1991 the present day monks celebrate their first commercial bottling, and today they grow (without herbicides) on 8.5 hectares, producing 40,000 bottles of premium wines, 60% reds. Frère Marie, a graduate of the viticulture school at Hyères has been in charge for ten years. Alongside layman Daniel, the main chemist/technologist, they do it all with only four employees. And the Cistercian monks of course...and some of the guests, who help with the picking. They use the services of a laboratory in the Var to supplement and augment the lab work done here. Chardonnay and all the reds are aged in oak.

Marie explains that three things create the conditions for great wine-making: climate (no winter), terroir (protection and isolation), and the water (from an aquifer so no chemicals, chlorine). I think they add a bit of prayer. When I first came to the island back in May, after exploring the island and before heading back, I tasted the St. Honorat 2010. It was the best red I'd had - cherries, earth, silence. I finished with St. Sauveur 2010. Hallelujah, there IS a god. These monks know how to make wine! 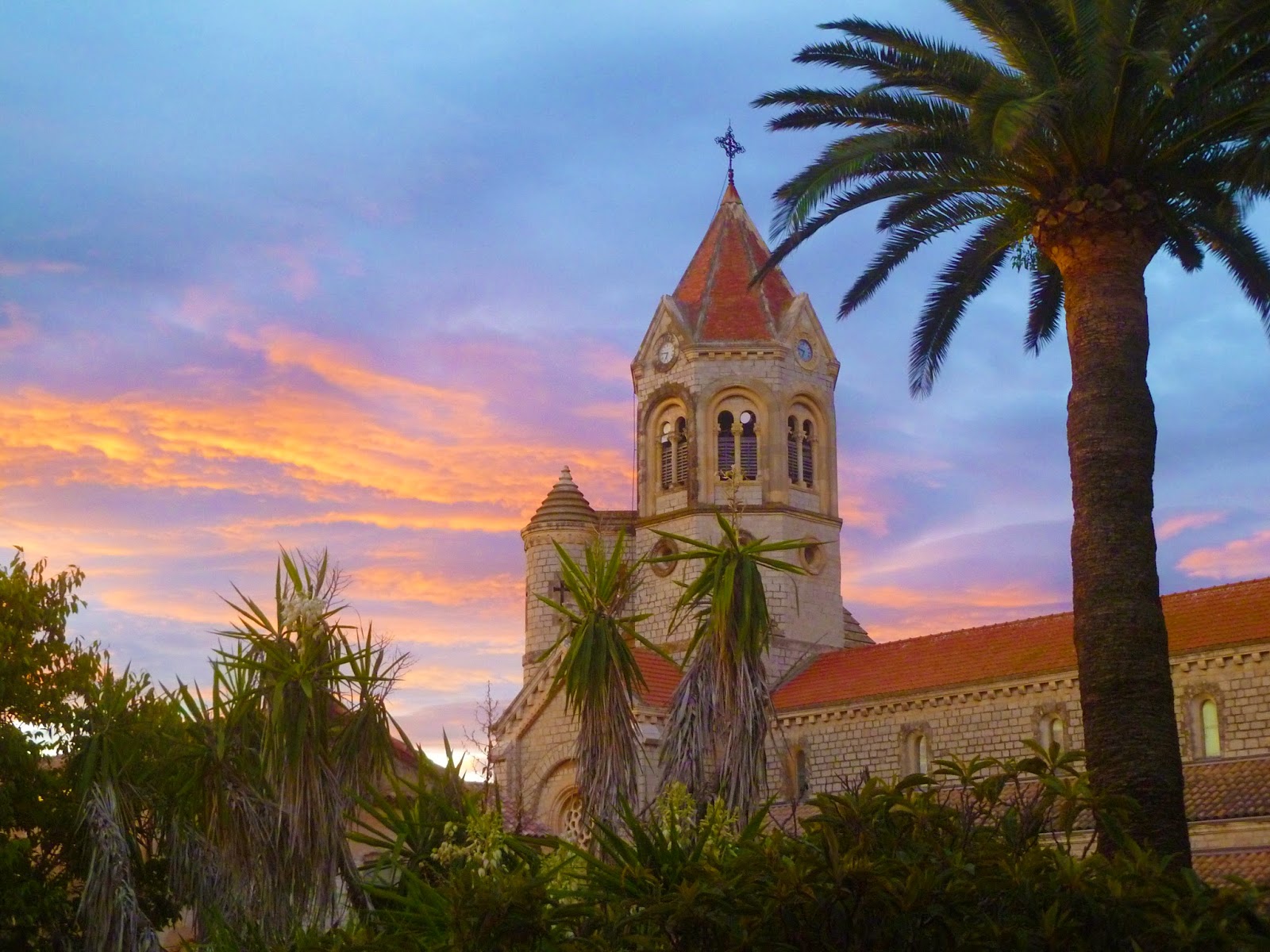 An oasis of silence
with no telephones, no internet (ok, for emergencies), no schedules other than those of the laudes, vespers, mass, etc. We drop our personal histories. Here I am not a writer, nor a grand-mother, nor the former 'Queen of the Pacific'. I am just a seeker like everyone else. Introspection. Inspiration. Breathing...breathing. Just to be is holy.

"When I find myself in times of trouble...", and aren't we all in troubled times? War, suffering, crises the world over. Here without the barrage of bad news 24/7, without the locked and loaded open carry of my sad country, without the hustle of a world ruled by banks and capital markets, one can find peace. Pheasants know they will not be hunted. People know they will not be judged. No one is overworked. There is an ease of days, broken only by (voluntary) work or attendance at services and meals. A safe haven.

We break bread communally three times a day, six persons to a table, the meals taken in silence, starting and ending in prayer. Breakfast is self-serve - café, tea, or chocolate, toast and jam. Occasionally grapes are left on the tables from a picking. The main meal is midday - a salad, bread, wine, fish or chicken (cooked as only the French can), dessert, coffee. Cheese of course. A meal to look forward to. The evening meal is salad, croque or maybe a wild mushroom quiche, yogurt or fruit salad.

Silence stretches into the night, with the last service at eight. I amble back to my room as stars load the sky. A jet, bound for Nice, flies through the big dipper. Lucy in the sky... I sleep in peace.

In the early morning, I circumnavigate the isle for two hours in silence - broken only by the sounds of the sea, the trees, birds. I shoot the sunrise, and it takes my breath away! After watching boys camping by the port, I complete my circle tour and sit in silence at the church. And wait for lunch. And I fall in love with yet another island :-) 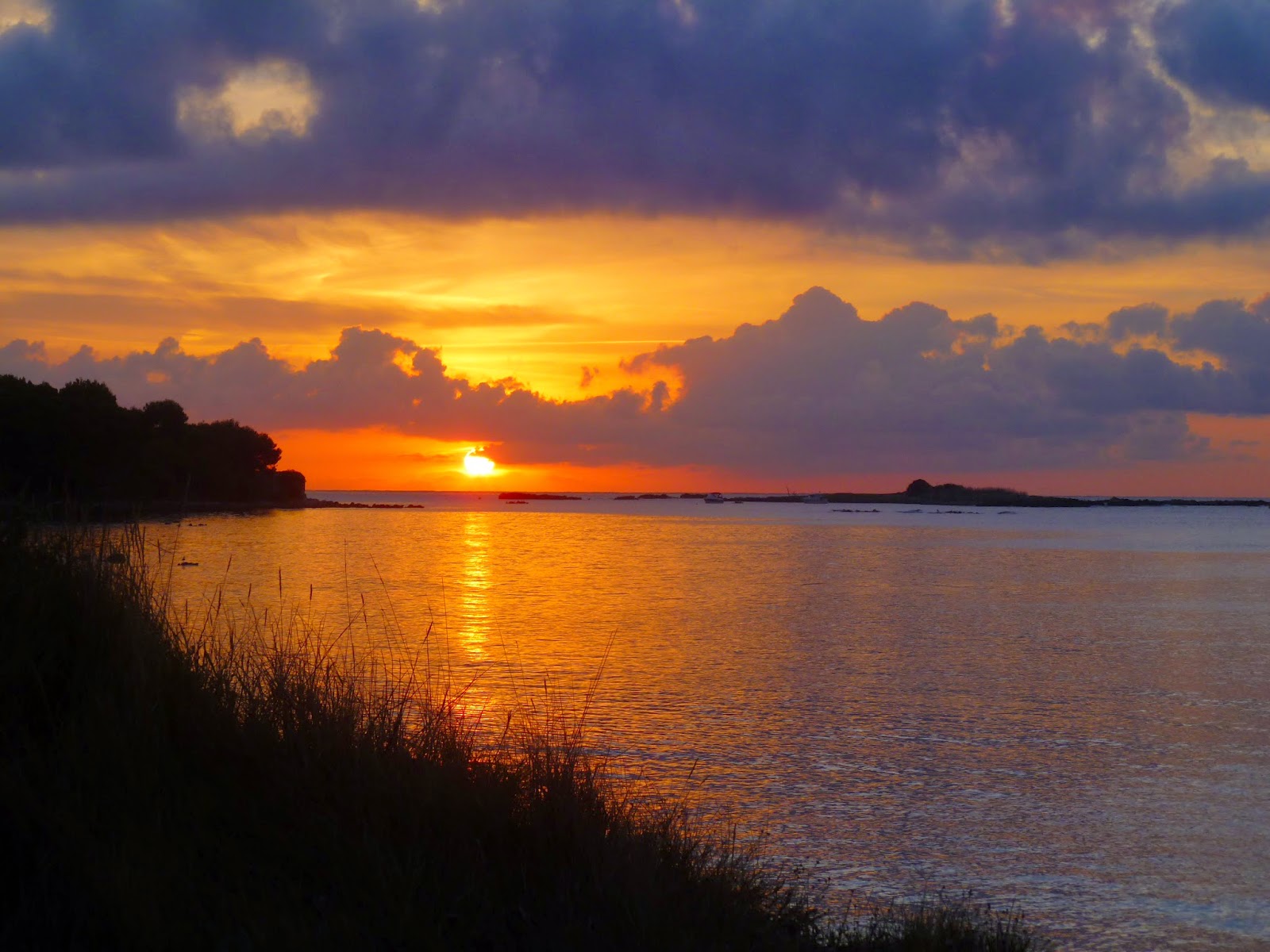 You can too. Watch HERE

Take an axe to the prison wall.
Escape.
Walk out like someone suddenly born into color.
Do it now.
Rumi

tutu
Friends think I'm the travel guru. I think of myself as an adventure junkie. Whatever...I love being on the road, tasting new cultures, new experiences, art, food. As a passionate entrepreneur, I created several businesses on the US mainland, in Hawaii and the South Pacific, for many years brokering private islands and boutique resorts. Today I write...and photograph. I write content for businesses - blogs, articles, brochures, annual reports, press releases, etc. I write a regular human interest column, freelance for many publications, and publish photography books, cookbooks, and novels. Traveling to over 90 islands and 60 countries, I have tales to tell. Stories from magical places – Bora Bora, Aituatki, Rarotonga, Fiji, Koh Phangan, St. Honorat, Maui...and more – pepper my writings, which are autobiographically inspired and informed. Visit One Foot Island and Saturday markets; watch quick-hipped dancers, hear tribal drums, feast on coconut cuisine and taste the essence of island places, island lives. My life is my art (and being on the road, I get to live in color). Life's a trip...so get out there and enjoy this bright, beautiful planet!